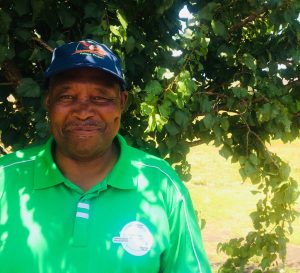 [morena – a respectful way to address an influential gentleman in Sesotho, the official language of Lesotho]

Morena Mpiti (69) is Chief of Masemouse village, high in the mountains of Lesotho.  As a young man he had to take over the chieftaincy from his father in 1972.  Realising that he was not quite up to the task yet, he left the village in the very capable hands of his stepmother, and returned 6 years later to formally take up his position as the head of the village.

As the village chief, Morena Mpiti looks after the welfare of all the people in his jurisdiction.  This can amount to more than 2000 inhabitants per district.  Together with his 6 Head Men, Morena Mpiti acts as administrator and judge in issues requiring an independent and objective verdict.  In this way the police and courts only get involved in very serious cases.

Morena Mpiti is truly committed to his position and invests heavily into the development of his people, 24 hours per day, 365 days per year.  One day Morena Mpiti’s eldest son will move back to the village and take over the reins from his father.

Chiefs are appointed by birthright.  However, a good and valued Chief may also be elected as Counselor by the people in his jurisdiction, as was the case in Morena Mpiti’s appointment.  As Chief and Counselor it is his responsibility to ensure that the people are treated fairly, that they are paid a fair wage and that no corruption takes place.

Since Morena Mpiti became a part of the Rosehip family 16 years ago, he has nurtured the relationship between The Rosehip Company and his people in such a way that the bond is still strong, even after so many years.

A lover of nature himself, Morena Mpiti encourages the people from the community to toil the earth and increase their live-stock numbers in order to provide for the community themselves, not always relying on handouts.

Morena Mpiti: “Rosehip means a life. The rosehips are flourishing this year, so we hope the market will be good.  If we maintain the rosehips, the rosehips will give back to us in due time.”

WHAT IS ELITE EQUINE?

Elite Equine is a rich source of Vitamin C, naturally anti-inflammatory and a puissant antioxidant. Rosehip has been scientifically tested and evidence to improve the general health, protect cartilage, reduce inflammation and promote the general performance in horses.